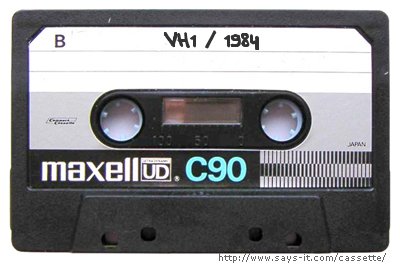 Van Halen’s 1984 was the soundtrack of my introduction to Dungeons and Dragons.

It would be sexier to say that I started listening to Halen from the beginning with Van Halen 1, but I didn’t.  It was even on the other side of the tape that my future brother-in-law made me, but I didn’t care to listen to it in the

beginning.  I was a boy in need of fantasy, and thanks to the music video show on Superstation TBS, Night Tracks, David Lee Roth and friends kept me from thinking about acne, divorce, and all the other tidbits of teen angst being a seventh grader might provide.

At this point in my life 5150 had came out, but I could have given a shit (to be fair, I still don’t).  My intro to really listening to Van Halen had to do with the power of the video: Sammy Hagar had that no-seriously-I’m-hot-and-a-ROCKER-but-I’m no-clown-baby look to him, but it was a look I wasn’t interested in.  A chubby kid, hovered over some graph paper creating a fantasy world from scratch out of dedication to attempted friendships and exercise in an effort to exhaust your brain about your new stepmom, does not need a hero that’s soulfully pleading for understanding; he needs one cocky and weightless, a coked-up court jester with a smallish package and a katana.

The videos for “Jump” and Panama” set a trend most appropriate for the ego-driven foresome; just them on a stage, letting their self importance get more sweaty and turgid as it went.  Back flips.  Finger taps.  Eyes-closed poochie faces.  Hefty and untalented?  Here’s a whisky bottle guitar and a wire rig.  The musical bombast needed a bombastic frontman to work.  The Red Rider would not be caught dead with a rhythmic gymnastics ribbon or an aviation-goggle-zebra-Lycra stirrup pant ensemble.

For the Trans Am crowd desperate for trim, “Hot for Teacher” delivered; the band was re-imaged as fifth graders, googling at the new hoochies-turned-teachers.  The nerdy Waldo gets all the girls in the end, a glimmer of hope for all the young’uns of the world (call me an early bloomer, but the shlubby Michael Anthony held more of my attention than “Miss Phys Ed” did even then).

The rest of the album’s songs are good enough, but if there were any videos for them I don’t remember.  “Drop Dead Legs” had great harmonies and a cool breakdown at the end.  Was “Top Jimmy” about Hendrix?  I for sure wasn’t that cool to know, but the song’s upbeat tempo balanced out the sultry burn on “Little Dreamer”.

Later in life?  Sure, it was all about the first Van Halen album.  1984 might have needed those videos to work; now far removed from the video being my main source of music, the songs championed by those videos don’t hold up as well as the others. Van Halen’s back catalog is currently inspiring the next round of primadonnas, substance abusers, and greatest hits cover bands, but the first moments of Van Halen in my life were reserved for the vision of rock ridiculousness, not the sound of it.  It might not have been important to the band, either.  David Lee Roth left after that, along with a huge segment of the fan base.  We’ll always have Panama, though.