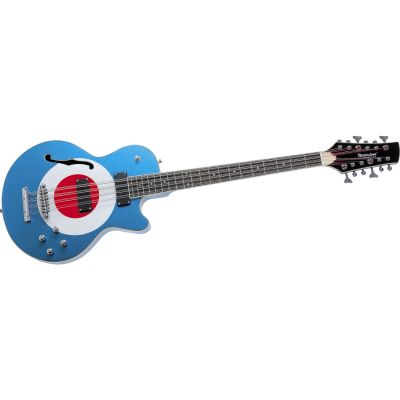 The first 12-string bass was invented in 1978, sometime between the Jonestown Massacre and the first limited-theater release of The Deer Hunter, giving it the kind of ominous, Satanic creditably it would need to perform as a rock and roll instrument.

The 12-stringed bass in question was made by Jol Dantzig, the perfect German horror stage name for some baby-eating pig masturbator or equally demonic person, Hell-bent on building a Starbucks for the Antichrist with the power of rock music.

When a stringed instrument has multiple strings that are meant to be plucked together, almost always tuned to the same note, those coupled strings are referred to as “courses”.   Although a couple of different arrays of 12-stringed basses are out there, the favored version among the brimstone-scorched rock cognoscenti consist of four three-stringed courses; each course is made up of the typical bass guitar string, with two smaller-gauge guitar strings coupled along.

Dantzig first built an 8-string bass for his demonic commission, then added two more to see if the neck would survive the Satanic tension; after the neck remained turgid and stiff throughout the torture, Dantzig added the other two strings.  Birds fell from the sky.  Every horse and cow within ten miles gave stillborn births.  Artesian springs welled with blood.  An instrument of pure evil was born, and Hell followed.

The 12-string bass guitar was invented to fulfill a dark, ancient prophesy.

The evil luthier Jol Dantzig, in his craven abattoir called Northern Prairie Music(located in the demented suburbs of Chicago), made his first 12-string bass for the noted gore pervert Tom Petersson, bassist in the Order Of The Golden Dawn worship band, Cheap Trick.  The chill-inducing sound of the bass courses can be heard on the shocking track “Heaven Tonight”, from the album of the same name.  The album, noted for it’s album cover showing two Pagan lesbians in near embrace, is full of Satanic imagery  but the mulit-octave tones of the 12-string bass make this song, a tribute to pedophilia and heroin abuse, sound even more craven and sickening.

The most well-known purveyor of this demon stick, the wand used in necromancy and trance induction for carrion-devouring sex acts, forcing tritones and minor chords onto the glistening, filthily naked bodies of Asmodeus’s rape-starved army, is Doug Pinnick of the Christian prog trio King’s X. Like most Christian rock bands, King’s X’s music, crafted mainly by Pinnick himself, is rife with lurid, Satanic imagery of sacrifice and washing one’s body in the blood of the innocent and crucified, even going so far as to eating the crucified’s flesh as a sign of horrifying macabre devotion. Here is a song Pinnick wrote about felching a freshly-slaughtered jackal, called “Pray”.

Now that you know that the End Days have been brought about by an instrument so Satanic, complicated, and superfluous that it makes Pinhead’s sex toys look like Fisher Price minifig people, try not to succumb to it’s salacious siren’s call.  I would love to tell it’s not the reason that the new Starbucks just popped up or that the Pope quit his day job, but the evil of those rock music tracks above will not be denied.  Good luck.

Whoever This Lady Is