Here’s the commercial for Scientology that ran during the Super Bowl.  I find it really odd that a church feels it needs a commercial, and feels that it needs one so badly that it runs one during the Commercial Olympics.  Yes, it might need an image scrub or a facelift, but there’s nothing new and improved about Scientology.  Notice the commercial never states “now with less litigation” or “75% less science fiction” anywhere.  Same old stuff.

Beck’s latest project is a commercial for Lincoln Motors.  I want to just leave that right here for a second.

I spent a lot of time with my Grandpa Carney.  A bluegrass musician, he taught me about the music he loved; we spent time watching Hee Haw and Austin City Limits, or just time with me staring in amazement as he played his guitar.  He taught me how to drive too fast.  He smoked, which gave my mother the psychological drive to smoke, which gave me the psychological drive to smoke when I did.  He taught me how to shoot and respect guns.  He is responsible for a lot of my personality in one way or the other. 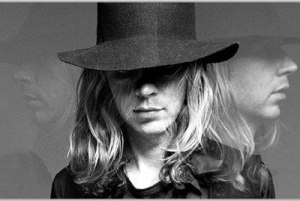 styles that make up Beck’s music; one of Beck’s grandpas was a Fluxus artist, the other one was a Presbyterian preacher.  His albums cover a wide array of styles without ever losing their integrity or sincerity; it’s too easy just to say “all the Dust Brothers-produced albums are fonky and all the Nigel Godrich albums are moody”, and it wouldn’t be wholly accurate if you did.  No album of Beck’s escapes a bit of folk, a bit of funk, a bit of country, and a bit of freak.  You do have to stop doing The Robot for just a second when “Lord Only Knows” shows up on Odelay; “Diamond Bullocks” may seem like an afterthought on Mutations(depending on who you talk to, the whole album might have been an afterthought), but you also have to have your mellow harshed a bit by “Tropicalia” in the middle of the album, too.

This is the first break Beck gets from me, but it’s the easiest, too: all this genre hopping.  I heard One Foot in The Grave quite a bit after I heard Mellow Gold but before I heard Odelay, and even though  they seemed almost too different, there was one aspect of Beck’s style that tied everything together; his lyrics.  He writes lyrics like Raekwon and Ghostface do(if you don’t know, this is a compliment to all parties involved), filled with assonance and near-rhyme free form.  As the albums unfold, the sincerity remains for me, even if the styles are all over the place.  All of this “style”, it is important to mention, never manifests itself into “image”, which is why Beck’s sincerity is never questioned by me(and why, even with his enormous talent and drive, I still don’t fully trust Jack White).

He gets forgiven for this, which I still can’t believe my mind will accept:

He gets a break for his last album being released only as sheet music, even though it makes me scared to death. 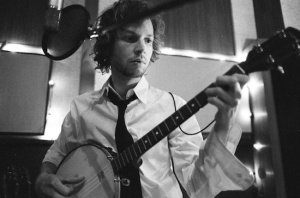 I probably have enough talent and patience to learn how to play the guitar well.  The problem, and the reason I haven’t, is two fold: my love of expression is constantly, at all times, at odds with my self-consciousness.  Musical, verbal, culinary, sexual, spiritual, textual, and every other way I might express myself still dodges fear and my own self worth issues, and always will.  Picking up that guitar and woodshedding with real purpose would be difficult but not impossible.

The other reason is that so many of my most powerful emotions, depressive and joyous, come from the guitars that I own; the electric Fender used to make the above-mentioned lucky strikes and the 6- and  12-string guitars that belonged to my grandfather.  Playing the guitars I own would be an exercise in putting myself, as the person as I am now, psychologically unfairly against my grandfather’s past opinions of people like me.  I would be playing them alone.  Playing the guitar for me now would be an attempt to say a long-forgotten name of God aloud.

There is one dear person that knows all of my truths.  Just one that I’ve allowed myself to be not just honest but disclosed to.  We recently had a musical conversation in which a mixtape was unwittingly made into the soundtrack of the previous paragraph, fleshed out.  It killed the conversation dead.  It was an unfair but explosive bit of writing, like a derrick fire being snuffed out with dynamite.

I’m at a point in my writing where I’m waiting on some phone calls for writing opportunities I surely will not get, and rejection letters I fully expect to recieve.  And as took a couple of deep breaths, there my grandpa’s guitar cases sat, Pandora boxes.  It would be noble for me to say that the guitar is too prominent of a thing that a tubist would ever want to play, but it wouldn’t be the reason they are standing there unopened.  It’s exhilarating fear that keeps them locked up, the fear of what I might say, speaking in tongues again.

When Beck put his album out in book form only, I thought about getting it, buying it for all of my friends, and making a “reunion” album.  Then I had a panic attack about it.  Not mad at Beck for it, though.

So Beck gets forgiven for this, too.  As neat as a concept as it is, and as super-surprisingly unobtrusive Lincoln is in the video, he needs a little forgiveness; it’s kind of pedestrian sounding.  You know exactly how the Kevlar-headed drum line and the church robed choir is going to sound, even how the arrangement was going to sound when they were featured.  Beck wanted to make an attempt to feature “Sound + Vision” deconstructed  with the separate parts from the original re-imagined: I don’t hear it. The “big finish” is too heavy handed.

The thing that saves it is its superfluousness.  How did this get green-lit?  Why?  Huh?  Was Beck their first choice?  Was this setup the first choice?  There are some little films about the making of the video, but the real magic would be seeing this whole project come together.  I mean, break down the term “A&R” for a second– “artists” and “repertoire”.  The “A&R” part seems like a good match, but where did this idea originate?  From Beck, or a creative team… from a car company?  Huh? 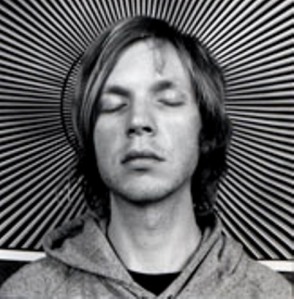 formed deeply when you realize everyone is a reflection of yourself; everything you feel is something everyone else has felt, or will feel, or can feel.  I am too quick to refuse to see myself in a Scientologist because of its far-fetchedness.  But on occasion I dare to see myself in Beck Hansen, and it is enough; driven to a system of peace, driven to sound and expression, wanting to be unique, wanting to be emotional without being damaged by them.  Scientology is adamantly opposed to psychiatry and psychology, but I don’t know that Beck feels the same. I don’t know if he needs it, or would think that I needed it.  All I do know is that Scientology made a commercial without Beck while a car company did.  I’m not sure if Scientology didn’t want him or if I unfairly assume he would want to.  I’m not sure if that makes him more or less of a hero for them.